Thanks to Pottermore we now have a brand new behind-the-scenes shot of David Yates, Callum Turner & Eddie Redmayne on the set of Crimes of Grindelwald (click to view in our gallery): 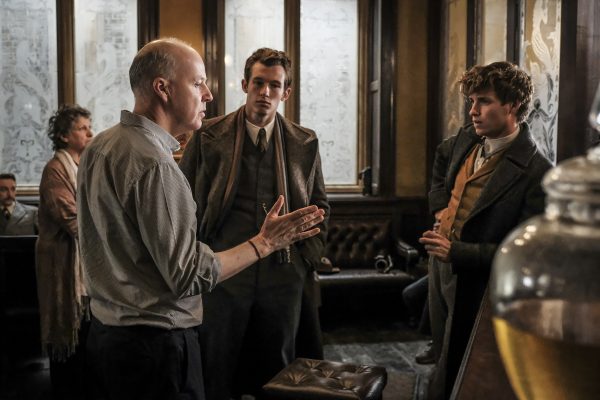 In more set report news, we now have descriptions of some of the new beasts we’ll see in the film:

The Firedrake looks like a small flying lizard with long antennae. It could be mistaken for a dragon, except, instead of breathing fire, the Firedrake emits sparks from the end of its tail that set anything flammable ablaze.

The Leucrotta resembles a large moose with very long, jagged antlers. At first glance, there is nothing overtly unusual about the Leucrotta…until it opens its mouth. The Leucrotta has what would seem to be an impossibly huge mouth in respect to its head and face—big enough for Newt or his assistant, Bunty, to put their entire head and shoulders in to clean the animal’s teeth.

The feline Matagot is a spirit familiar somewhat resembling a hairless Sphinx cat. In France, they are utilized by the Ministry of Magic to do menial jobs, including staffing the mailroom and providing security for various other departments. Matagots won’t attack unless provoked, but then will transform into something far more menacing.

The Zouwu is a monstrously large feline beast—as big as an elephant—with a striped body, scraggly mane, four fangs that curl up out of its mouth, and long sharp claws. Perhaps its most distinctive feature is its disproportionately long and ruffled multicolored tail. Native to China, Zouwus are incredibly powerful and fast, capable of traveling 1000 miles in a day. The Zouwu in Fantastic Beasts: The Crimes of Grindelwald was captured by Skender, the owner and Ringmaster of the wizarding world’s Circus Arcanus, and bears the scars of its abuse.

Crimes of Grindelwald Character Descriptions
Back To Hogwarts Featurette