Details for the Crimes of Grindelwald movie soundtrack have just been released, including the cover art: 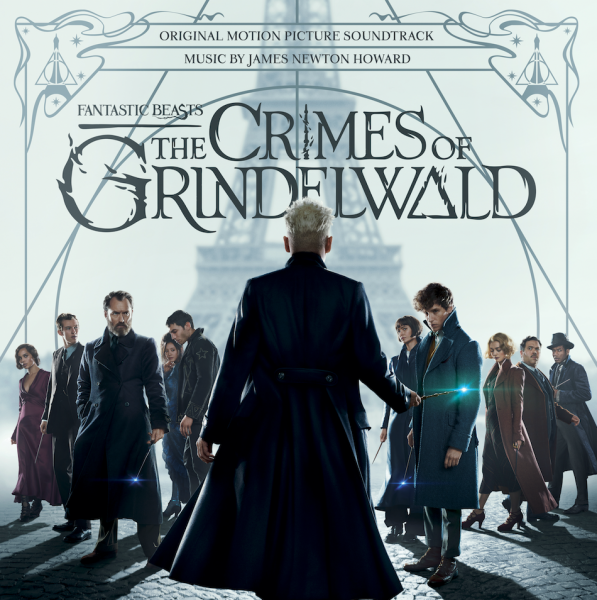 WaterTower Music today announced the details of the original motion picture soundtrack for Fantastic Beasts: The Crimes of Grindelwald, the second of five all new adventures in the Wizarding World™ created by J.K. Rowling. The film will be in theaters November 16, 2018.

Grammy and Emmy Award winner and multiple Oscar nominee James Newton Howard (Fantastic Beasts and Where to Find Them, The Hunger Games franchise) returned as the Fantastic Beasts composer, creating a robust, 25-track soundtrack which will be available to stream and purchase digitally November 9, 2018. Fans are able to hear two of those tracks early, as WaterTower Music has just released both “Fantastic Beasts: The Crimes of Grindelwald” and “Salamander Eyes” for streaming and purchase.

“To work on Fantastic Beasts is a wonderful musical opportunity,” describes composer James Newton Howard. “The movie is delightful, substantial, and complex; and [director] David Yates focuses very seriously on the music and is a truly passionate and enthusiastic collaborator.”

The album is scheduled to be released digitally on November 9, a week before the film’s release. It will be released on CD on November 30, 2018 and on vinyl in January 2019.

You can pre-order the soundtrack on Amazon here, with options to download the mp3 file or purchase a physical album or vinyl.

Two of the tracks “Salamander Eyes” and the final “Fantastic Beasts: The Crimes of Grindelwald” are currently available to stream on services such as Spotify and Deezer.

They are also available to listen to on Youtube: