Empire have just released a brand new promo image from Fantastic Beasts: The Crimes of Grindelwald.

The movie still shows us Newt with his infamous magical case open, possibly to attract a beast inside: 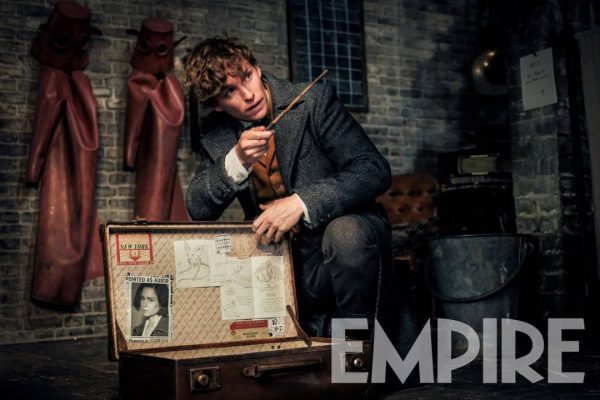 The write-up along with the article:

There was always a political edge to Harry Potter, even with all the dragons and broomsticks, Voldemort was nothing if not a fascist. However, the way producer David Heyman talks about The Crimes of Grindelwald, the sequel to 2016’s Fantastic Beasts, makes it sound like we might be leaping into a political thriller.
“It’s about the dangers of absolutism and fundamentalism,” says Heyman. “We see that in Grindelwald”. To recap, he was the dark wizard arrested at the end of the last film, revealed to be Johnny Depp in a Colin Farrell disguise. A year on, he’s on the brink of escaping prison and trying to unite the magically powered to crush the merely human. His means to achieving this, unlike those of Potter’s Voldemort, are not just fire and fury. “For me, Grindelwald is a scarier villain,” says Heyman. “He’s very persuasive. One can see the rationale in his arguments – which doesn’t mean his methodology is right.”
On the other side are international wizarding governments at odds and in disarray. “Newt [Eddie Redmayne] is refusing to have anything to do with the Ministry of Magic [after the events of the last film].” Finding Grindelwald’s weak spot is going to need a new agent, in the shape of Dumbledore, whose shape is now a lot younger and more Jude Law-y. He and Grindelwald have a complicated, romantic history, meaning Dumbledore knows him better than anyone and how to use Newt to get close to him. “An important thing to remember about Dumbledore,” says Heyman, “is that he is a master manipulator. He manipulated Harry.” Magic can solve a lot of things, but sometimes it’s no match for a bit of political maneuvering.

Now for some theories:

If you look closely at the image you’ll find that it’s from the same scene as we see Jacob & Newt in the first trailer (note the metal bucket, brickwork & Newt’s Beastium Magicum in the corner):

We know that Newt & Jacob are already in Paris together by this point so this begs the question – where are they? This is clearly a space Newt knows as his belongings and beasts are there – but so is his case so they’re not inside it. Is it his assistant, Bunty’s?

What do you think? Let us know your thoughts over on Twitter!