In another new press junket interview with Ezra Miller – this time with influencer Jayden Rodrigues we learn more about Credence Barebone’s character development in the second Fantastic Beasts film – The Crimes of Grindelwald.

A transcript of all the relevant parts:

J: Fantastic Beasts is a great addition to the Wizarding World universe. What can fans come to expect in the next installment – Crimes of Grindelwald?

J: Your character – we saw a very troubled Credence Barebone in the first movie –
E: Yes, you’ll continue to see one
– well what are we going to see in the next installment from your character; what’s your character like in his development in this next one?

E: Certain things change certain things remain the same. I mean, Credence as a person as we know with a deeply troubled history and unfortunately what you experience in your young life is stuff you gotta work with through the rest of your life and I think Credence is no exception. He has more awareness of his situation than he did in the first one. That alters things a lot. So, instead of being unaware of what’s going on; confused; no knowledge of who he is or what he’s capable of or what lives inside him, now he knows and there’s the weight, the responsibility that comes with that knowledge and it’s scary I think, because he had to sort of get rid of all the ideas that he had about who he was or who he was supposed to be because he discovered that all of that was rooted in falsehood. He’s literally, perhaps despite his intentions, but what lives inside him has murdered his past. So now he’s liberated from that past but he’s also freaked out because now he has to figure out who he is and he has no idea. And he’s sort of a ticking clock – he’s got this thing inside him that’s going to kill him if he can’t figure it out and part of that has to do with his identity. So it’s a messed up situation to be in.

J: How do you prepare for that ‘cause your character is very different from the first we’ve seen of him compared to this movie.

E: Which is so fun, by the way. it’s the first time I’ve ever really gotten to do that – play a character over the course of two films. In between making these two films I got to let Credence live his life. So between the last frame we see of him and the first one we see in the second film so there were times when I was traveling or traveling through Europe and I would just travel as Credence. Or I’d go to a pub as Credence. This actually happened one time where I went to a pub as Credence and the waiter, he was deeply deeply worried for me – people often have this reaction because there’s a pain you can sort of see and feel in him and so often, when I would embody him in the real world, people would be like ‘are you okay? Is there anything I can do for you?’ and of course Credence doesn’t know how to handle that. So that’s just so much fun.

E: You know, what I love about, cause that’s such a great question – what’s character driven, what’s action based – but what I love about working on these movies is that you rarely find one without the other. And I think what’s beautiful about Rowling’s magical world is that even every spell, every moment of action, it actually has huge personal, human implications. The spells represent ideas, ya know, if you want to cause someone pain; if you want to make someone happy; you wan to lift someone off the ground. It’s a huge movie – the effects are incredible and we’re on these massive set pieces and when we get to the work, it’s all very quiet and very focused and it’s like we’re working on a Shakespeare play or something with the amount of attention we’re paying to the details of these people’s feelings and connections.

J: During the movie, do you get any wanding action during this movie?

E: I can’t tell you if I get a wand- everyone tries to sneak it in. They know I didn’t have a wand, they know I was upset about not having a wand. I might still be upset about not having a wand! I can’t tell you. All I know is there’s wand-less magic too. Like house elves, they don’t have wands. What would even happen if you gave a house elf a wand? They’d crack the earth in half. They’re so powerful even without one.

Bonus image of Ezra brandishing a wand, which can be found at 7:56 in the video: 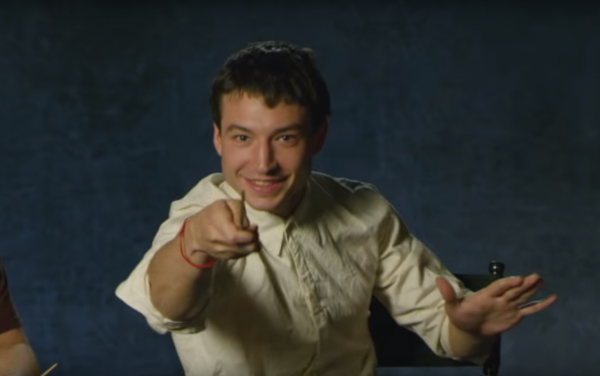